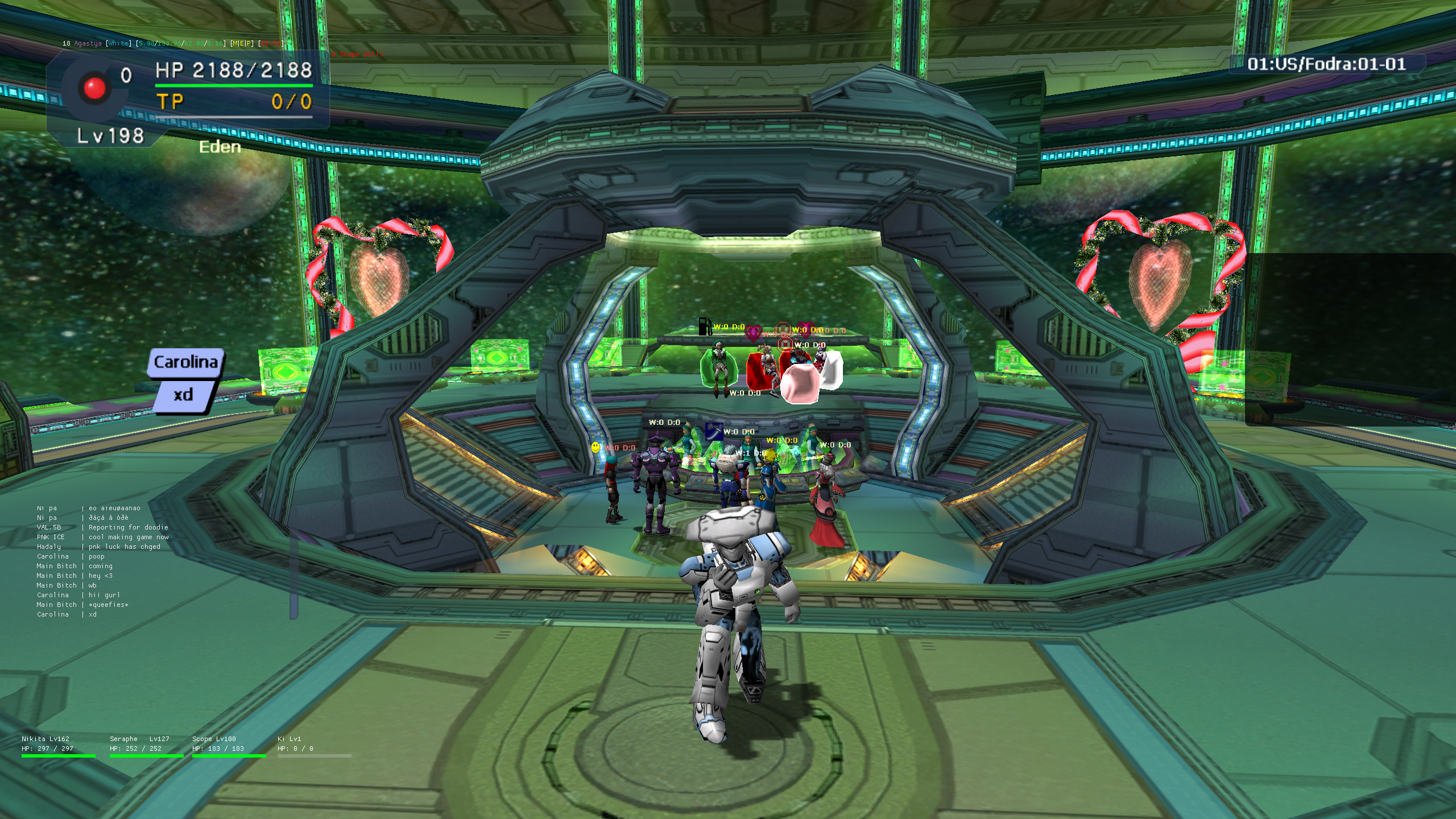 My favorite recent HUmar was TX. When I first met TX during the anniversary event last Summer, I immediately saw that he was very stoic & very quiet. At lv200, He embodied the very essence of a HUmar with a beautiful & classic black-hair Sephiroth-like look.

The dude was absolutely fearless. It didn't matter where he was or what he was fighting. His weapon of choice: 50 hit charge vulcans. Charge every mob in sight. Every time he came into the room it was always the same process. To him it was just another day in the office of Ragol.

He taught me one very important lesson: it doesn't matter how fast you do things the only thing that matters is you finished. 10 deaths in one run? Keep going boi. Doesn't matter if it's a 25-minute TTF run or a 11-minute TTF run to him there's no difference. A FUCKING champ is what he is.
3rd - DEMON Mechguns
Omae wa mou shindeiru

I know demand is high, but i'm patient! 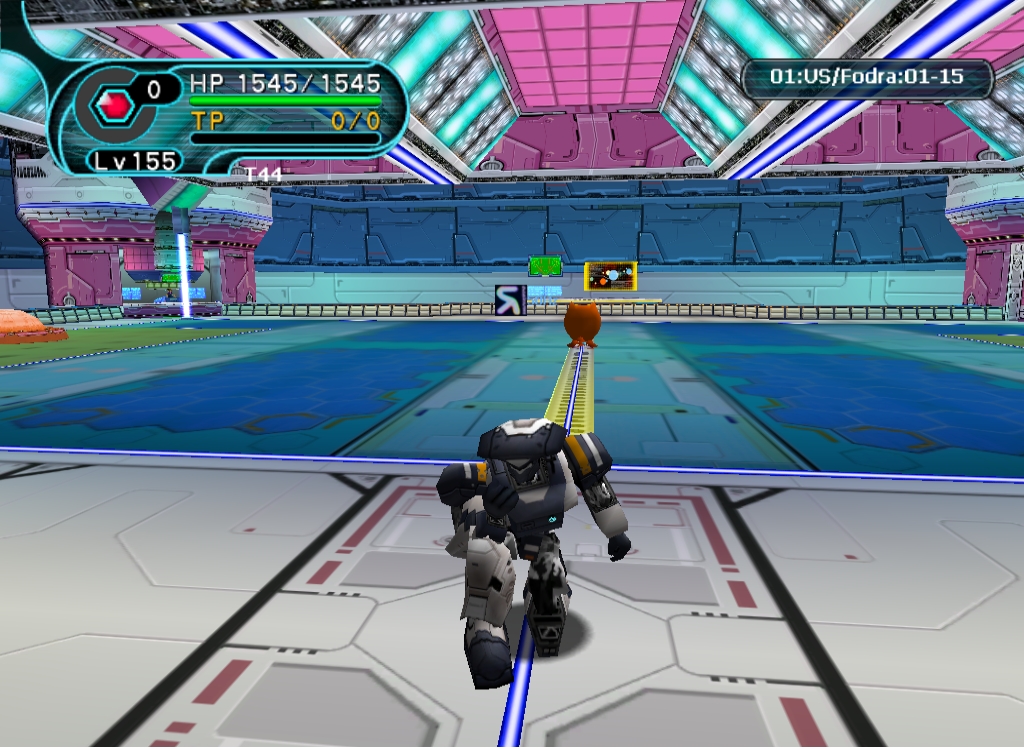 
My favourite HUmar was Azrael, my very first PSO character back when i started playing PSO on Dreamcast. He was a white HUmar with a white bowl-cut. He was of course named after Azrael the angel of death.

Others here were sucking up to you, by saying you were their favourite HUmar, but i will not do that!

The reason is, that while you are probably a pretty good HUmar, where is your lvl. 15 Megid??

Right, you don’t have lv. 15 Megid! Well Azrael had, and therefore was clearly the superior HUmar, beyond any doubt. I’m sure you agree.
3rd payment - "DEMON Mechguns"

View attachment 12652
I like to give a shout out to Skylar who is also known as @falkenjeff on the Ephinea forums. He was a cool guy that used to play with me when the Ephinea server was open to the public starting around the Summer of 2015. A lot of time has passed since then, so I like to give a few posts to remember him in the old days of Ephinea besides his signature post.

Remember that time when nobody understood that EA meme after falkenjeff said that he did quite playing? falkenjeff has you covered! Who remembers the time when fakenjeff didn't want to switch off of Apple's iPhone because he thought that they were going to reinstate the headphone jack but felt crushed after realizing Apple likes to "engineer different"? Finally, I like to finish off the list with another thread by falkenjeff where he underestimates how hard it is to see the problem in regards to the Meltdown and Spectre CPU exploits.
Hardcore Mode (HC): MAGICAL MECHGUN - 1 HC PD
I would like to propose to add both of my Ephinea forum names along with the name of the HUmar that I mentioned from the second order in this manner: @brionac aka @Villain - Skylar aka @falkenjeff
I appreciate the offer; please feel free to reach me by clicking the first link in my signature to have my contact information.
Click to expand...

@Yuffie Your VALKYRIE TWIN is done.
@brionac All three of your orders are done.
Click to expand...

Cool, thanks @Hardwood, keep it hard! 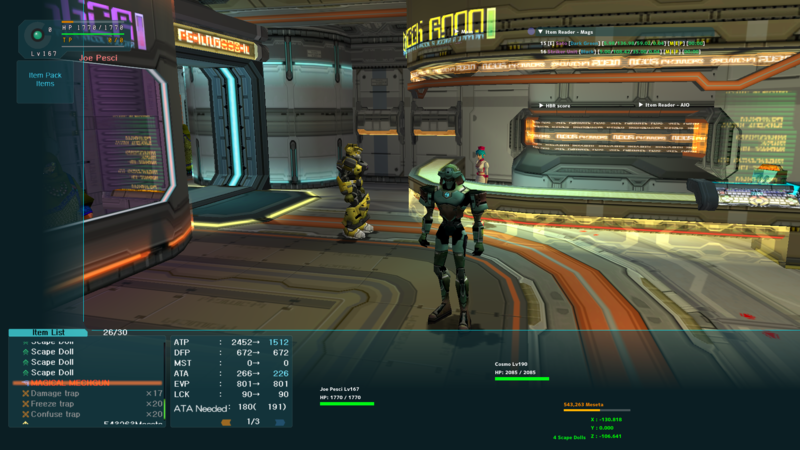 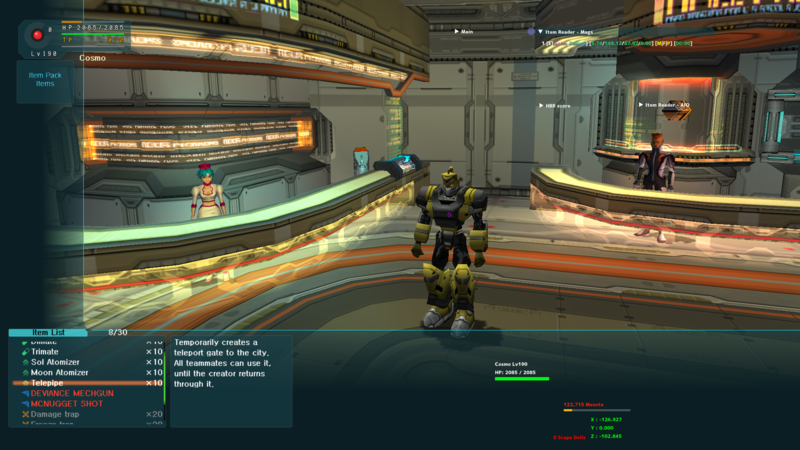 You're up next @Kyu! 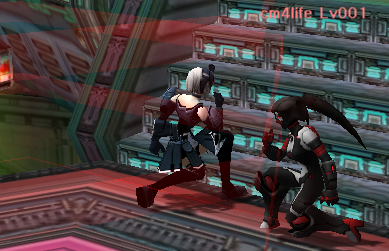 My favorite HUmar is my own, Goomba. He enjoys eating glue and dying in the Tower. He also enjoys no-hit weapons (especially Dragon Slayers) and he occasionally joins RES'd rooms. He always enjoys trying to hit flying Zu's with his DB's Saber and missing horribly. His mag Sync and IQ is always zero. Goomba is low level and only gets by, by leeching onto hard working PSO players. Pray for Goomba everybody, his HP is low. I remember making Goomba, I didn't mean for him to look like he's a a few photons short of a stack, but unfortunatly he is. I hope if you all see Goomba, you will grunt or make other happy noises so he can feel welcome on Ephinea. 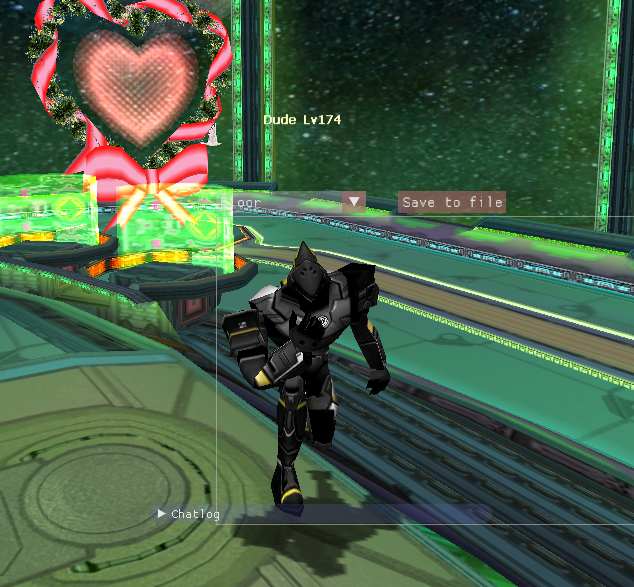 Second Order:
I would have to say my favorite HUmar is probably Brez4Prez. He was a super funny guy with a very kind heart and always willing to hunt whatever with whoever. I remember him always using goofy weapons too like the Crazy Tune and Samba Maracas. They were one of the many reasons why I initially stuck with and kept coming back to Ephinea. I really miss him and wish he would stop by again, but you know how PSO works and like everyone says 'you never quit PSO, you just take extended breaks'. There was also a rumor going around that Brez was famous!

UPDATE: MY REQUEST WAS HEARD BY THE PSO GODS!!!!!! BREZ CAN BE SEEN FROM TIME TO TIME IN THE MAIN LOBBY!!!! WHAT WHAT!!!

"ZALURE" Gun. ty for your service

I will take a Demon Mechgun, Zalure Gun, and Zalure Shot you generous man you!
Many moons ago in a far distant land, a HUmar named Bonquiqui was born. Little did everyone know that he would become to be the most famous and well like HUmar in all the land...As a young boy, he learned to love the land and all that encompasses it. That is when Bonquiqui came into my life. One glorious spring day, Bonquiqui was picnicking with his little Rappy friend Dontrel Jr., when out of nowhere, a savage wolf jumped out of the bushes, in an attempt to eat Dontrel Jr.! During this same time, I (Rufus the Racast) was clomping around the forest minding my own business and witnessed the dismay.

Bonquiqui quickly pulled out his Booma Claw in defense! The battle was endless! I spanned nearly 1 week and 100 levels. At the end Bonquiqui was victorious! To that day, Dontrel Jr. and I have grown to admire Bonquiqui more and more. Thus making him my very favorite HUmar in all the land.

I realize I made it here a little late and your queue is probably backed up to 2022, but if you're not burnt out yet then here's my request, @Hardwood .

1.
Edit: The internet has been giving me trouble with any filehosting I attempt to use, so if the image is not showing up, look here or I can get it to you another way:
https://1drv.ms/u/s!AmEVbBBLiEO4jWe5jhOZd9UPKlgB


2.
This is going to sound really arrogant but my favorite HUmar is my own, Genocidal.

He was originally a homeworld soldier on Coral who served among the royal guard, but when the capital building he was guarding was overrun by an extremist militia force, he was mortally wounded. During the engagement, he fell back to the underground gene splicing labs where his blood loss took him to the floor. Before he passed out, he drew some of his blood into a syringe and tossed it into a cosmic jettison capsule and launched it into space in the same direction that the Pioneer ships had set course. As he slowly blacked out and the militia broke through the laboratory doors, he made a wish that he would come back to fight another day.

Shortly after the landing on Ragol of Pioneer 1, the cosmic jettison capsule could be seen from Gal De Val as a flaming arch in the sky. It landed approximately six miles off the coast of the island and deputy commander, Heathcliffe Flowen ordered an immediate retrieval of the foreign object. Once they got it back to the lab and opened it, they realized they had an opportunity on their hands with this pristine sample of HUmar DNA. They would use this unclaimed, secret source of genetic material as a side experiment to be blended with the DNA of one of Ragol's strongest inhabitants, the Delbiter.

After some splicing and cloning, Genocidal sat inside a secret, sanctioned-off cryotube chamber in the laboratory, but before he could be released, the disasters we all know of began to strike. All scientists were wiped out and there was no one left to free him, except for one; an experimental mag designed for lab assistance, named Prote343-8241. Prote was programmed to deactivate all chamber locks in the case of an emergency where none of its masters survive.

Upon falling forth from the opened cryotube, soaked in a photon-enriched liquid, Genocidal had no idea who he was but could feel something orgaic, yet bionic gripping at his insides. At first, it was such excruciating pain that he could not move for days, writhing on the dark floors of a powerless laboratory, but eventually he began to feel this entity inside him slow to a calm, harmonizing symbiosis with his own tissue and organs. He and the Delbiter had become one.

As he escaped down the laboratory hallways, he came across an armory that had been unsealed along with the rest of the lab. Inside this trove, he discovered an assortment of high end gear, some of which had belonged to Flowen, himself - others were experimental devices designed by the laboratory staff. Among them, he discovered Flowen's sword with 50 hit, a 100 hit Geist raygun (which he later discovered he could use to counter the loss of TP from the sword's spirit), a powerful Virus armor, a maximum strength shield made from a De Rol Le worm experiment, and a peculiar mag that resembles the tail of a mythological creature from religious texts on a far away, long since destroyed planet called Earth, but this one was somehow purple instead of the black version he saw in the computer server blueprints.
Genocidal finally made it out of the laboratory and off the island thanks to a small group of explorers and rescue personnel from Pioneer 2. To this day, Genocidal enjoys free running around his new home of Ragol.

Random fact: Genocidal's hair is actually very short and his brain is very small...what you see is just a whole lot of thick skull mass which serves as a built-in helmet in battle.


3.
I would be infinitely honored to be accepted into your HUmar Fan Club!

Hey if you're still doing this I'd love a HELL SHOT 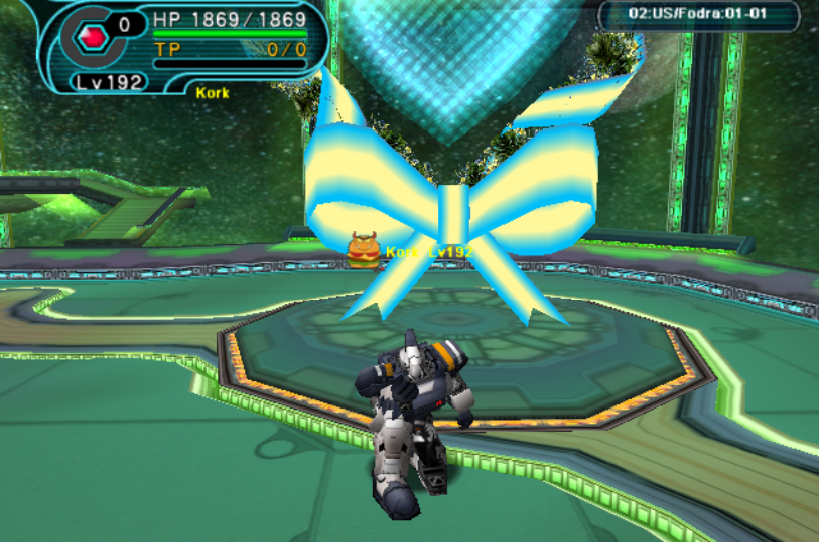