Welcome to The Penumbral Surge!​
This six piece quest series is my second contribution to Ephinea. This series is designed to be cousins to the Phantasmal World series where players rip through maps until the end where many monsters rise to produce a closing battlefield.

The premise of these quests consists around the same central theme. Gal Da Val Island is experiencing an eclipse and the darkness cast has become a beacon for monsters to infest the local areas. It's up to you to exterminate them!

Areas: VR Temple Alpha, VR Temple Beta
Gimmick: 1P, 2P and 3P games will have players locked into doing the Blue Route of VR Temple Alpha. The full monster count cannot be achieved unless the quest is loaded with 4 players. In a 4P game, the quest will load players 1 & 3 and 2 & 4 split into two routes. Players 1 & 3 will be loaded into the Blue Route while players 2 & 4 get loaded into the Green Route. At the end of the map, all players will meet up and raid VR Beta together.
Version: 1.5 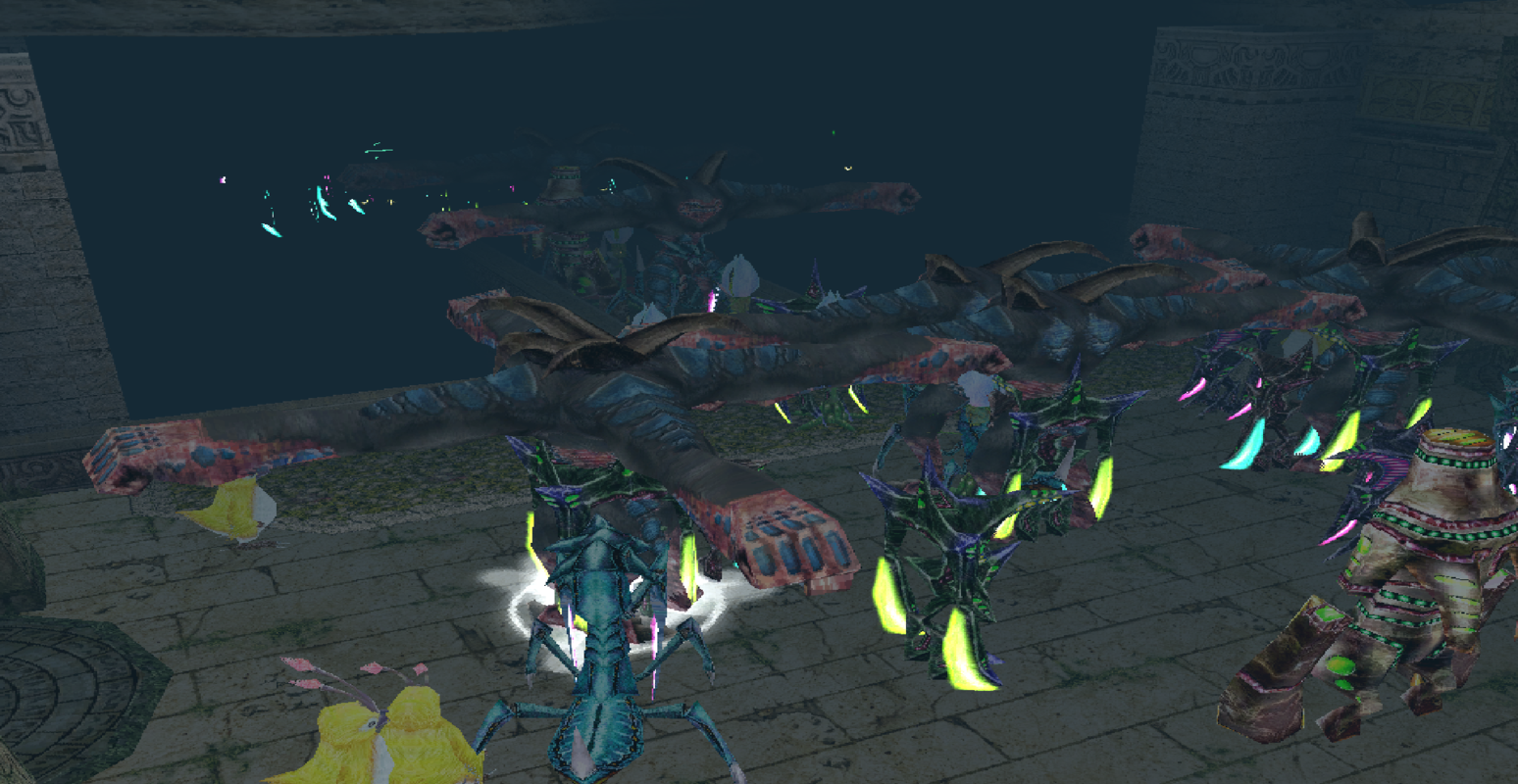 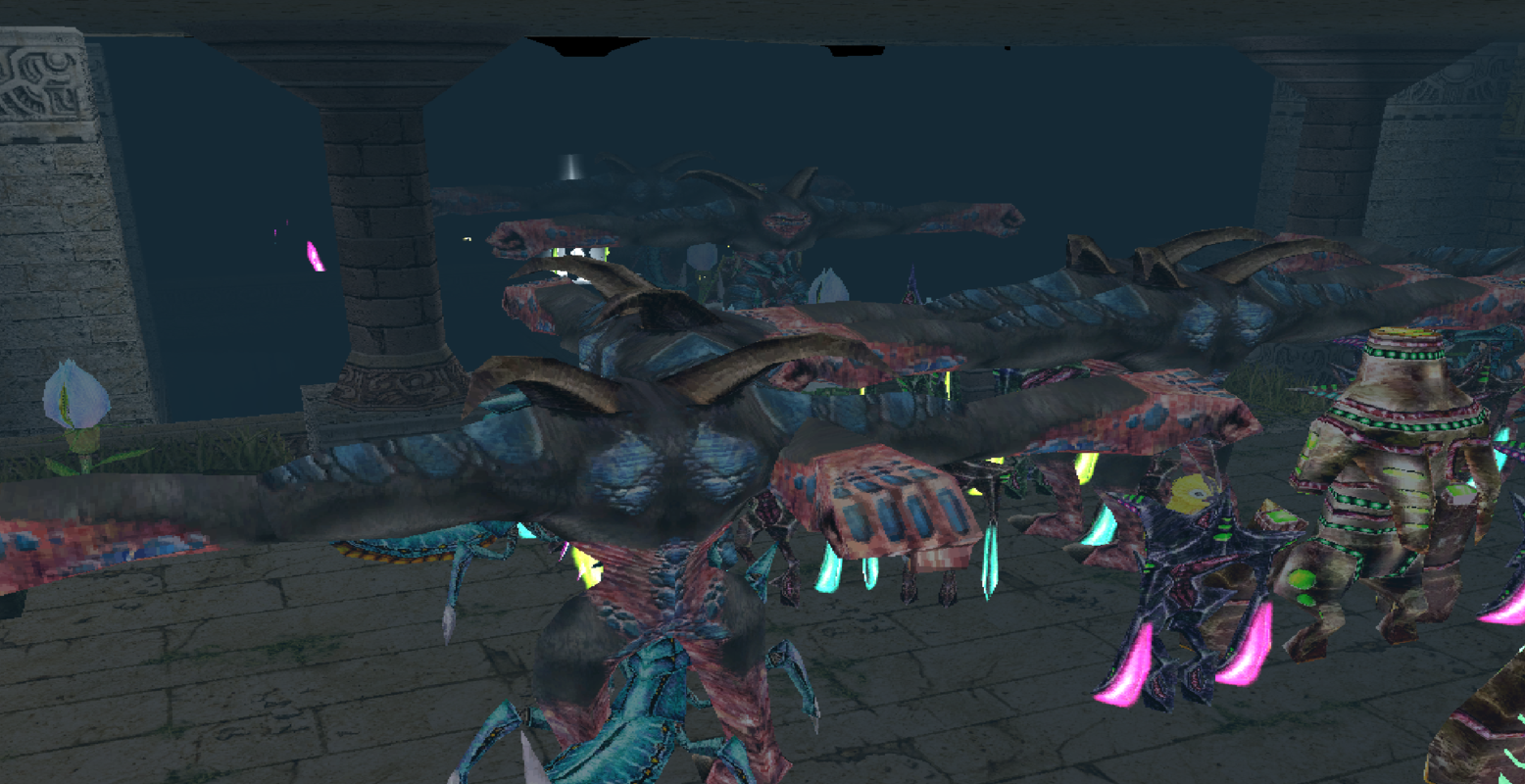 Areas: VR Spaceship Alpha, VR Spaceship Beta
Gimmick: In Spaceship Alpha, 4 different routes are given. All 4 have a switch at the end that must be pressed. When all 4 switches are actuated, the initial switch becomes accessible and players can make their way to Spaceship Beta together. Unlike PS1, all routes can be selected in any manner and each route has a monster thematic.
Version: 1.2 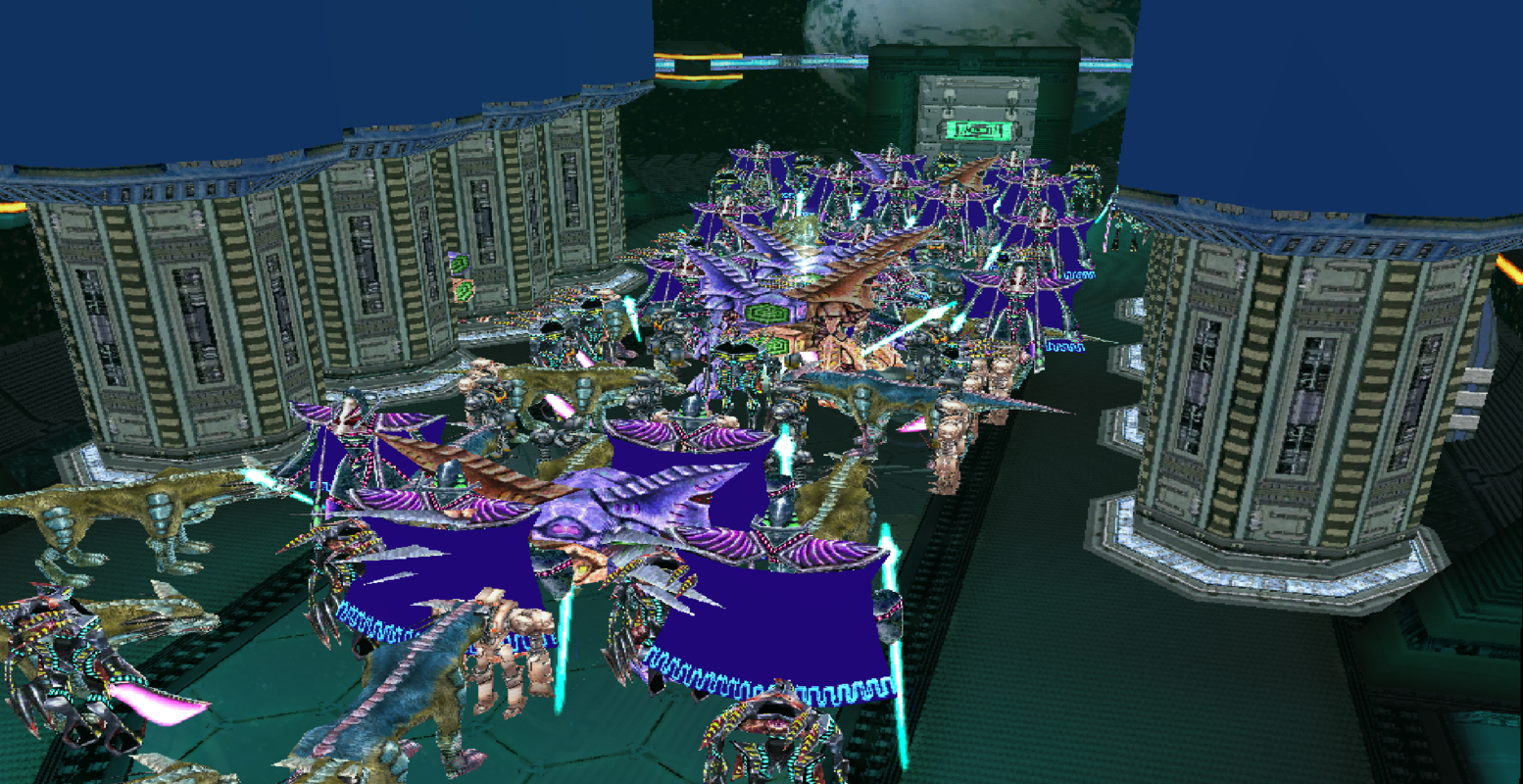 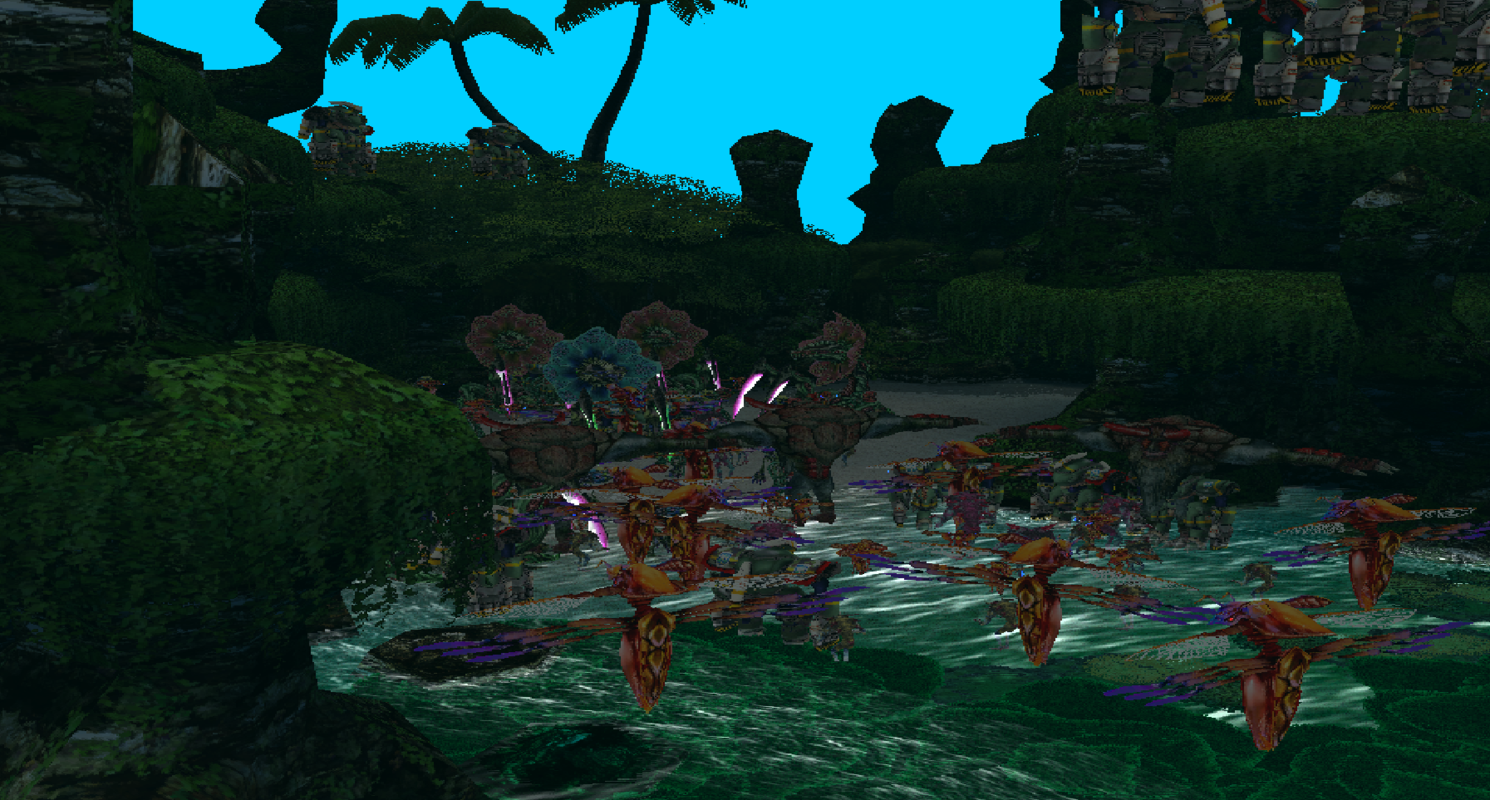 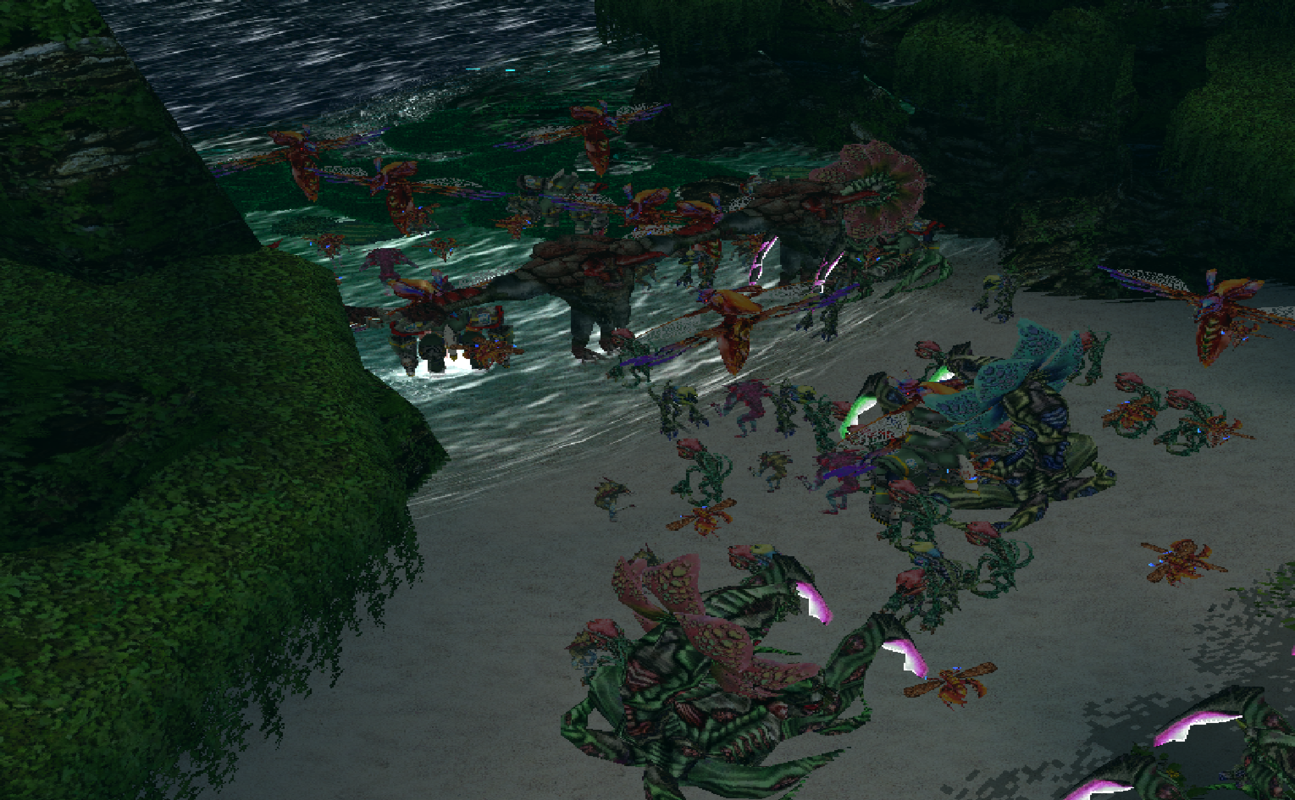 Areas: Central Control Area
Gimmick: Players navigate through the CCA and must make 3 laps around it to clear the quest. Each lap ends with one of the three different islands available in the CCA map. With each lap made, different obstacles and monsters will appear before players on the map.
Version: 1.2 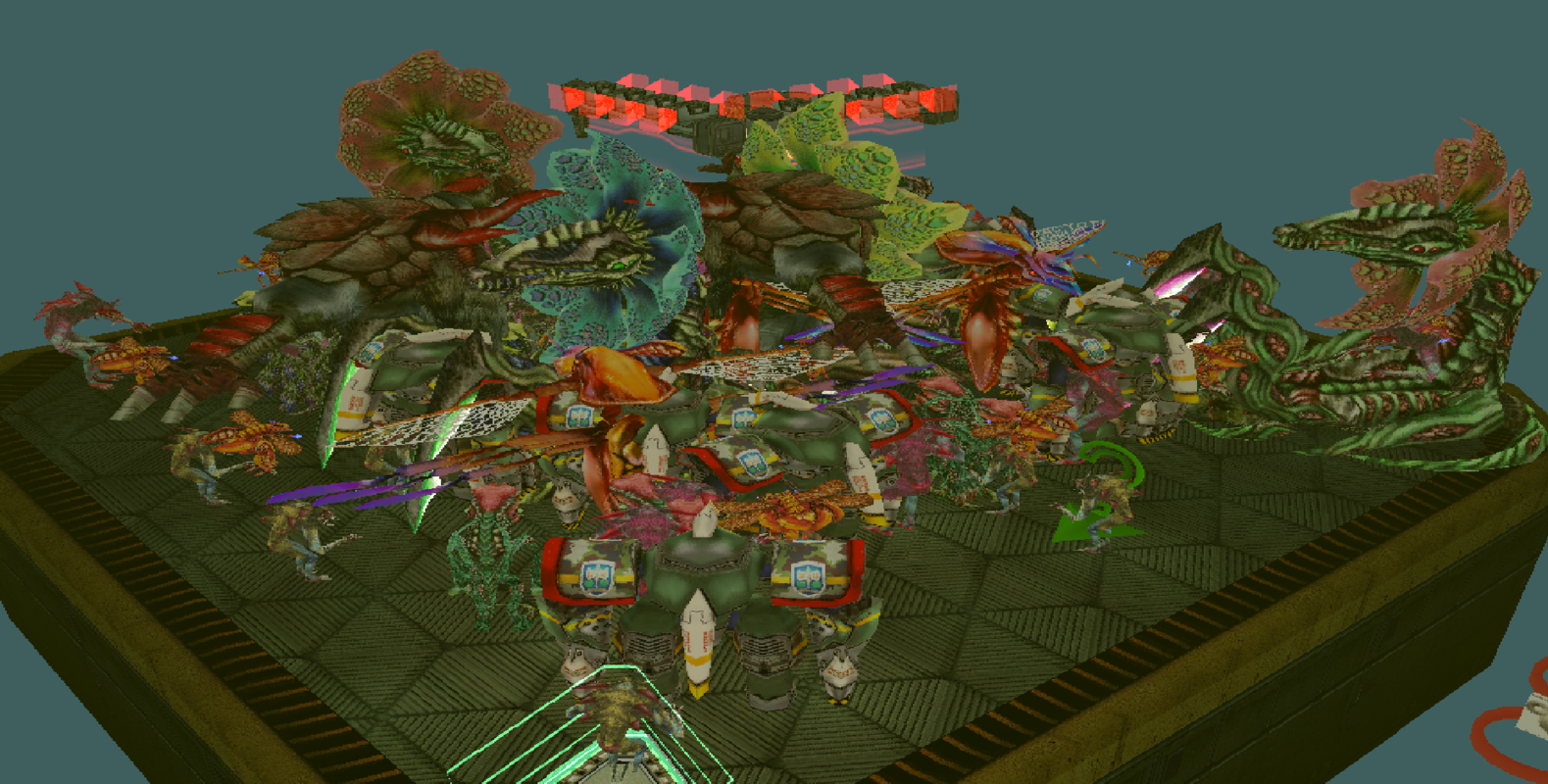 Areas: Seabed Upper, Seabed Lower
Gimmick: In Seabed Upper, the route eventually forks into 2 paths. At the end of each path lies a switch. When both are pressed, players can continue onwards to Seabed Lower.
Version: 1.4 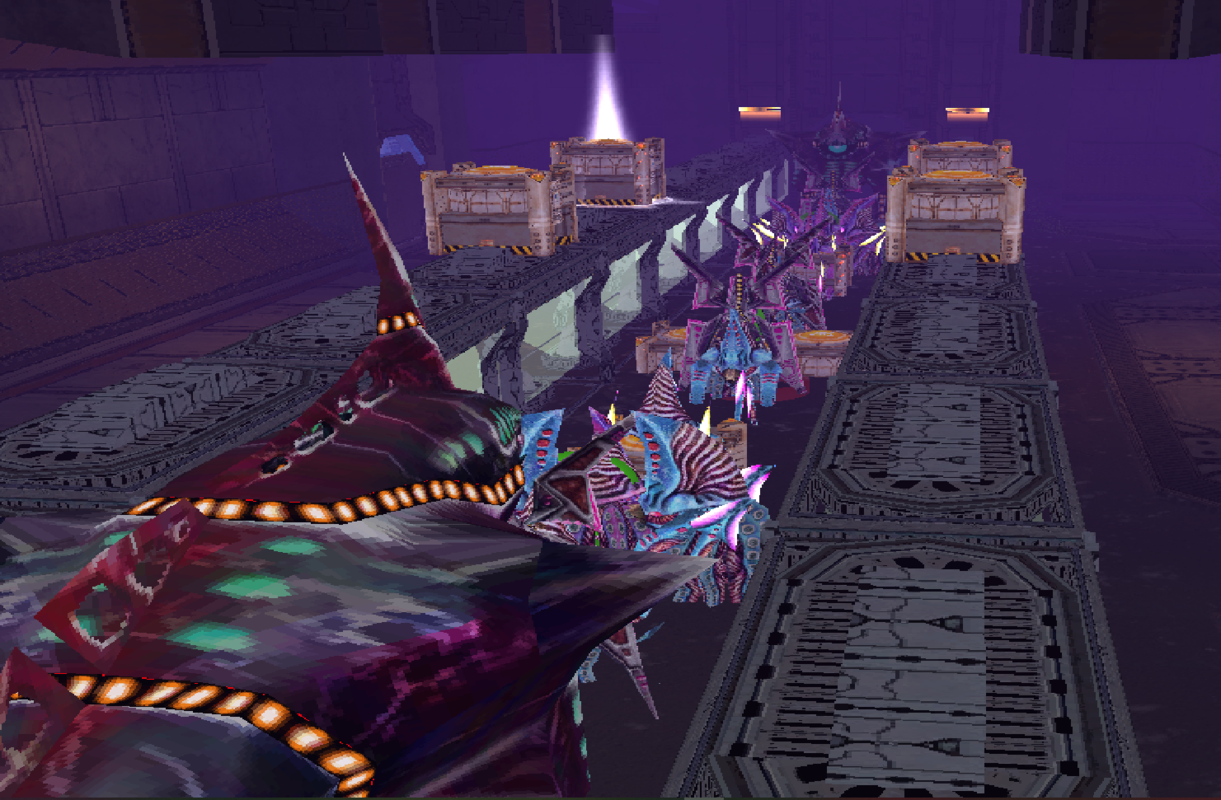 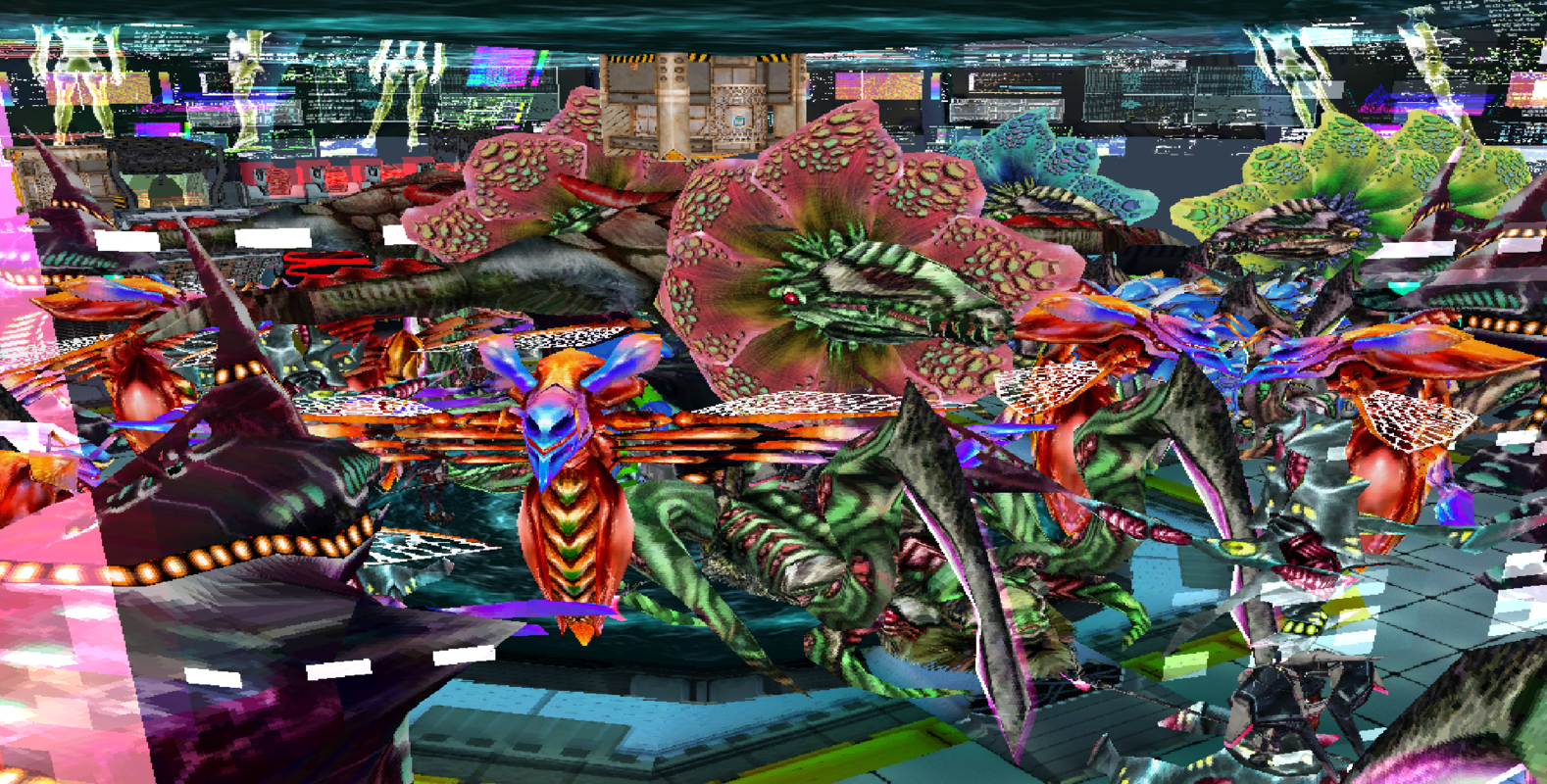 Total:
15 Mericarol
75 Del Lily
26 Delbiter
23 Gibbles
8 Mericus
57 Ill Gill
45 Recobox
30 Gi Gue
18 Epsilon
10 Merikle
Penumbral Surge #1:
1.1
- Fixed the insta-warp positions around the platform in Temple Beta. The SE warp will no longer warp you when on the edge of the platform.

1.2
- Changed the Grass/Crimson Assassin and Monest spawn on green route in bridge room so that it appears after all 3 sections are assembled. This is to prevent the Assassin from being able to float over the incomplete bridge.

1.3
-Changed the Door ID of the last hallway's door on Blue Route. It will no longer be open and openable by players on Green Route.
- Moved the Warp Teleporter that is on the pillar in Temple Beta so that it no longer sticks off the ledge a bit.

1.4
- Fixed a targeting issue in Temple Beta.
- Fixed the quest BGM audio for starting and completing.

1.5
- Added warp consoles to the end of each route in Temple Alpha. These consoles will warp you to the start of the opposite route you're assigned to.
- Added a handful of spawns to the Green Route in Temple Alpha. This was done to even out the two routes as the Green Route was clearing far faster than Blue.
- Some spawn delays have been changed. Some spawns have also been adjusted or removed for evening out times.
- Added scroll text indicating the switches in Temple Beta being engaged.

1.2
- Lowered the position on the colored particles for easier viewing.
- Fixed the quest BGM audio for starting and completing.

Penumbral Surge #3:
1.1
- Changed the end teleporter position to allow breakable rock pathway that becomes accessible after the large rock wall is destroyed.
- Added limits to exotic effects that trigger on laser detection. Set effects can only happen so many times before the lasers behave differently.
- Fixed a targeting issue in Mountain Area.

1.4
- Fixed the color filter in Seaside Area. It no longer disables when you die.

1.5
- Made a small tweak in the script to prevent a rare potential crash upon loading into Seaside Area.
- Fixed the quest BGM audio for starting and completing.

Penumbral Surge #4:
1.1
- Added a section of breakable rocks that open up on room clear for the rock hallway on lap 3.

1.2
- Fixed the quest BGM audio for starting and completing.

Penumbral Surge #5:
1.1
- Removed containers from the ramp accesses in some rooms where ledge clipping can result in getting trapped.
- Fixed a number of door positions.
- Replaced the initial door with a laser fence.

1.2
- Fixed a typo.
- Changed the warp into the eastern route in Upper to a particle warp that disables when the room is clear. This is to get rid of that warp panel that could potentially confuse people that may take it only to warp back into the room again.

1.3
- Fixed 2 Recoboxes in the last room of Seabed Lower. Their Recons now float at their proper heights.

1.4
- Fixed the quest BGM audio for starting and completing.

Penumbral Surge #6
1.1
- Changed the functionality of the darkening effect in the last room. It will no longer disable when you die.
- Added a camera quaking effect in last room of West Tower to signal the last set of enemy spawns.

1.2
- Removed 1x Del Lily from the 2nd floor of West Tower.
- Replaced a Heal Trap in East Tower with a Heal Ring. There are now a total of 3 Heal Rings in the quest.

1.3
- Fixed the quest BGM audio for starting and completing.
I hope the community enjoys them. I love contributing to this place as I cherish both this server and it's community!

NOTE: Even though these underwent many tests, there may be bugs and other issues that may have been overlooked. If anything is spotted, please report it ASAP for corrections when they are live.

This bump is to announce to the community that these quests are now officially open and out of the testing phase. Many corrections were squashed along the way BUT some more are bound to be potentially found.

If anything buggy or off occurs, please report the issues to me so they can be adjusted/fixed!

Monster counts have been added BUT MAY NOT BE PERMANENT. Down the line, there may be reason to change them, if necessary.

The average runtime for these quests range from 18-28 minutes in a 4-Player party.

These sound cool. I really like splitting into two groups for quests. Though an unfortunate side-effect of PSO2-style drops is that people become reluctant to do this (at least in quests where it's optional, like PW1)

Doing these in order at the moment just finished quest 3 after which the maintenance started for halloween and they may be some of my favorite quests so far. Really fun to solo too despite it being longer that way, as the progression in these maps are very streamlined and barely have any downtime in its action. Some very unusual spawns and setups that break the mold helps too in making the experience not monotone.
Thanks for these quests. Will play these a lot.

I see the Hildebears are asserting their dominance.

Thanks for the tests and the reports, everyone. It helped a lot with fixing and/or adjusting things that needed looking into.

Updated versions of the 6 quests have been loaded to all ships and I added a change log in the OP for any curious eyes.