Staff member
We've got an exciting new feature for you guys and gals to test out on Ephinea. We would like to introduce... integrated VOIP into PSO!

We're not quite ready to make this "official" yet, we want to test it out more but also need to add configuration options into the launcher for it, but if you ever wanted to have seamless voice chat integration with PSO without having to launch TeamSpeak, Discord, etc., Well, now's your chance!

If you're willing to test out, download http://files.pioneer2.net/voipdll/ephinea.dll and place it into your EphineaPSO folder.

While you are testing, be sure to launch the game from PsoBB.exe and not online.exe during your testing. The reason I say this is because if you launch with online.exe, you will get your beta DLL overwritten with the non-VOIP DLL.

In the beta, VOIP is enabled in all lobbies by default, though you can configure it some what using the registry.

The DLL supports 4 keys at the moment, their presence located in HKEY_CURRENT_USER\SOFTWARE\SonicTeam\PSOBB\Ephinea. The keys are:

VOIP_ON, a DWORD value, can be 0 or 1 for VOIP ability on or off in the client.

VOIP_PTT, a DWORD value, can be 0 or 1 to use Push-to-Talk. If VOIP_PTT is 0 and VOIP_ON is 1, your client will auotmatically record when your input level reachs a certain value.

VOIP_PTT_KEY, a DWORD value, which can be a any of the Virtual Key Codes listed at: https://msdn.microsoft.com/en-us/library/windows/desktop/dd375731(v=vs.85).aspx

If VOIP_PTT is on and VOIP_PTT_KEY is not set, the default Push-to-Talk key is "T" on the keyboard.

VOIP_MINLEVEL - Sets the sensitivity for auto recording. This value can be anywhere from 0 to 100. The default value is 5 when no value is present.

Example of how registry entries can look at: http://files.pioneer2.net/voipdll/voip_reg.png

After testing, all of this will be configurable in the launcher, as well as the minimum level for automatic recording. But, for the beta, this is all that is configurable and it's all through the registry.

Also note that the DLL currently ALWAYS USES YOUR DEFAULT RECORDING DEVICE *not* THE DEFAULT COMMUNICATIONS DEVICE. The device you use will be configurable in the launcher later.

There are also a number of new ship commands that go along with the DLL. They are:

/muteuser x - Temporarily mutes a user using their guild card number. The user will be unmuted when /unmuteuser is used or you switch lobbies.

/unmuteuser x - Temporarily unmutes a user using their guild card number. The user will be muted again when you switch lobbies *if* they are on your guild card block list.

/listuser - Lists current users in a game along with their guild card number. Does not work in the lobby. (Use TAB to check guildcard numbers of players in the lobby.)

Would love feedback on this feature!

P.S. The new DLL also enables the rare drop sound to play even when you have BGM off.
Last edited: May 16, 2016

I've said it before and I'll say it again. What a god.

VOIP_INBOOST - This will multiply the volume voices you receive by a percentage. 100% is the normal volume. You may want to raise this past 100 as PSO's music can be loud.

VOIP_OUTBOOST - This will multiply the voice you send by a percentage. 100% is the normal volume.

VOIP_MINLEVEL - Sets the sensitivity for auto recording. This value can be anywhere from 0 to 100. The default value is 5 when no value is present.

You will need to download the DLL again to take advantage of the new keys.

P.S. Remember this is a beta, this will be easier to configure from the launcher and/or in game later. Thanks for testing.
Last edited: May 15, 2016

Seriously cool feature. I'm glad it's being beta tested so carefully! I trust that you'll implement it extremely well in the end! Can't express how awesome this server is enough! Great work!

This is amazing! I can't wait until I finally get enough free time to round up my buddies and finally play PSO just like the old times. Although I suppose being physically together will always be the best

Staff member
OK, I nuked the boost registry keys in favor of a new automatic gain control algorithm put into the newest beta DLL. This should help with not being able to hear some people.

You can get the newest beta DLL at the same URL: http://files.pioneer2.net/voipdll/ephinea.dll

I'll be looking more into adjusting the overall volume of PSO's music to go along with this, but AGC should be a great boon for voice chat as well.

Not entirely sure if this is related but whenever I get a sound coming from a message pop up like from Facebook or Discord, the volume from the client automatically drops to 0. Never happened before this .dll I am also not using it.

Staff member
Don't think it's related at all even though it didn't happen before this DLL. Pretty sure something else on your computer has changed to cause that.

Staff member
On that note, since you mention Discord which probably identifies itself as a "Communications" app when it initializes the sound, you should check this setting under "Sound" in your Windows control panel.

It's possible you have it ticked to "Mute all other sounds". 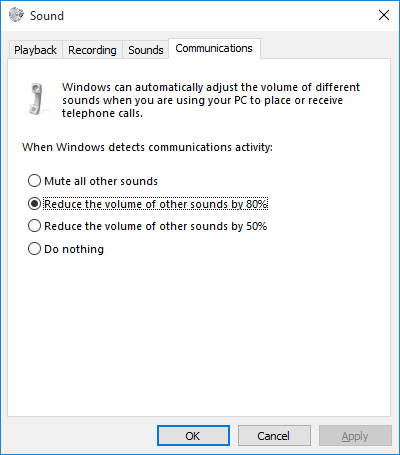 Interesting, I will have to test that out. Thank you for the heads up.

I don't think it has to do with communications activity, in fact is just a notification.
I have "Do nothing" and the notifications still reduce the volume, not to 0, but gets reduced drastically... which sucks.

Soly said:
I don't think it has to do with communications activity, in fact is just a notification.
I have "Do nothing" and the notifications still reduce the volume, not to 0, but gets reduced drastically... which sucks.
Click to expand...

Yea, that description certainly matches up to mine. I ran Discord on browser as well as Facebook and this happened even when it was a Facebook Private Message.

Staff member
OK, I put up another beta of the DLL (the final one is coming really soon along with an updated launcher to pick your recording device, trigger levels, PTT key and what not).

This new beta has some optimizations on the code, some bug fixes, but also adds some new options to the lobby counter where you can adjust BGM, Sound Effect, and Voice Chat volume.

You can download it from the same URL at http://files.pioneer2.net/voipdll/ephinea.dll

Sodaboy said:
but also adds some new options to the lobby counter where you can adjust BGM, Sound Effect, and Voice Chat volume.
Click to expand...

Voice chat in the lobby now has logarithmic volume. Volume of speaker is dependent on how far away you are from him or her. In a game, voices are always heard full volume, but you can determine who is speaking by the opacity of their name. Their name will slightly fade out while speaking.

Voice chat in the lobby now has logarithmic volume. Volume of speaker is dependent on how far away you are from him or her. In a game, voices are always heard full volume, but you can determine who is speaking by the opacity of their name. Their name will slightly fade out while speaking.
Click to expand...

This is incredible. This is even better than Xbox PSO.

Staff member
OK, updated the beta DLL again. The following changes were made:

- Added In-band Forward Error Control for missing voice packets. (Unfortunately, this means that anyone you talk to will have to have the updated DLL for chat to work correctly as well as the previous DLL doesn't know what to do with FEC information if it's encountered in a packet.)
- Changed handling of decoding voice packets a bit and improved the wave handling threads.
- Fixed a Windows XP issue with Print Screen.

Probably just about ready to launch, just waiting on Tofuman to get the launcher prepared... haha...