The monkey is in the basketball!

In a galaxy, far, far away, there was a planet called Coral. They were doing some shit with photons, when one day, a comet hits the planet!!11 Inside it was some highly advanced photons that were really cool and powerful. Naturally, the people of Coral decided the best option was to use this technology to create MAGs. After that, they made Newmans (probably because someone wanted to make their D&D elf waifu real) and Androids, because screwing around with an alien technology will never lead to anything bad, right? This also lead to a majority of the weapons in the game, from the common Saber to the Heaven Punisher.

But then, disaster struck!!! The planet starting dying (surely no way connected to the meteor, right?). The l33t scientists of Coral tracked the meteor back to Ragol, which was also habitable. Coral figured they could knock out two birds with one stone by finding a new planet and studying Ragol and see if there's more cool tech there, so they started the Pioneer Project. They made Pioneer 1, which was packed with scientists and, oddly enough, a shitload of weapons, making P1 seem like a mix of a science vessel and a prepper's compound. It also has three AIs; Olga, Vol Opt, and Calus. Of course, the public was never told about the SCIENCE!!! part of P1.

P1 lands and starts doing their research. They build the Central Dome, and start digging as much as humanly possible to find the source of the meteor's photons. They find something called a "D-Cell", which is basically your average "evil virus that fucks shit up". Your local mad scientist, Dr. Osto, gets a huge boner from this and decides to make bioweapons with it with approval from Coral (because apparently beasts that glow like Christmas trees make for the best weapons). In fact, he even gets his own evil tropical island lair, complete with underwater labs!

Meanwhile, P1 finally finds the Ruins after a lot of digging in the Mines and heads in to see what goodies are inside. They're exploring when, all of the sudden, Dark Falz (probably in some spooky ghost form) attacks and kills the dudes exploring it. They're then turned into the loot pinatas that inhabit Ruins.

All of them, except for one: Flowen. He managed to survive and, heavily infected with D-Cells, chats up Dr. Osto. Not realizing that it's not a wise idea to strike a deal with a mad scientist with a tropical island fortress, he agrees to donate his body for research in exchange for being declared dead, and most importantly, telling P2 to go back because Ragol is a lot more dangerous than imagined. Homeboy Osto agrees with the first one, but like any good mad scientist, does not do the second, presumably because P2 means more test subjects for him.

Anyway, Osto's research is going somewhat well. He managed to make critters like Morfos, but unfortunately for him, two of his major test subjects escaped: Gal Gryphon and De Rol Le. Gal escaped and somehow managed to create the A. Beasts on Osto's sweet island. De Rol Le, with nothing better to do, made the Caves critters by impaling them with his tentacles and injecting some sap in them while waiting for COPS to come on. Thanks to Osto, Ragol now has various bloodthirsty mutants running around. Well done!

Osto, still not content with fucking up enough, decided to merge the AI Olga with Flowen, who is going a bit nutty and uncontrollable due to the D-Cells. Apparently, jamming an AI into a crazy guy will somehow make him controllable. It fails, creating Olga Flow. Osto dumps OF into a very large pit in his underwater base designed specifically for failed experiments. Thus, Olga finds his new home, where OP adventurers will farm PGFs off of him for eternity. Thanks for nothing, Flowen.

P1 is still blissfully unaware of everything going on, until, one day, Pioneer 2 finally shows up. Everything looks nice when DF appears and makes a freaking huge explosion. Oh snap!

Now everything on Ragol is in chaos. P1's staff and civilians are dead, the native critters are aggressive because of D-Cells, the robots in the mines leading to the Ruins are killing whatever's left because of D-Cells, the Vol Opt AI now working for Dark Falz (thus dooming him to endless material drops in his crates), Calus is being taken over by D-Cells, and Osto's tropical island now has the native critters, mutants, artificially-made Dark critters, and robots teaming up in an unholy alliance to prevent you from farming Psycho Wands, Zanbas, hit Diska of Braveman, and Monkey King Bars from them thanks to D-Cells taking them over.

But, someone did survive: Red Ring Rico. She goes off to explore WTF just happened, while conveniently leaving a series of capsules containing her thoughts about what is happening and her discoveries, and apparently, entrusting her custom Red weapons and accessories to creatures like Hildelts, Crimson Assassins, and Merlans along the way. She gets to Dark Falz, and is possessed by him, presumably so he has a body and can escape Ragol to create an intergalactic tour of destruction and chaos. Unfortunately for him, his is foiled over and over again by a group of pricks that want to get a Red Ring drop from him.

Apparently, the head of Pioneer 2 felt like adding more weapons to the ridiculous amount of weapons P1 has, so he commissioned a set of new weapons based off of every weapon type in the game. You know them as S-Rank weapons.

This is where you come in. Selected by the head of Pioneer 2, your goal is to collect as many rare weapons as possible in-between emoting and gossiping in the lobby. This has nothing to do with the backstory, but it sure is fun!

If you don't want to read any of this, I have made a comic that quickly covers the most important parts of PSO's backstory. 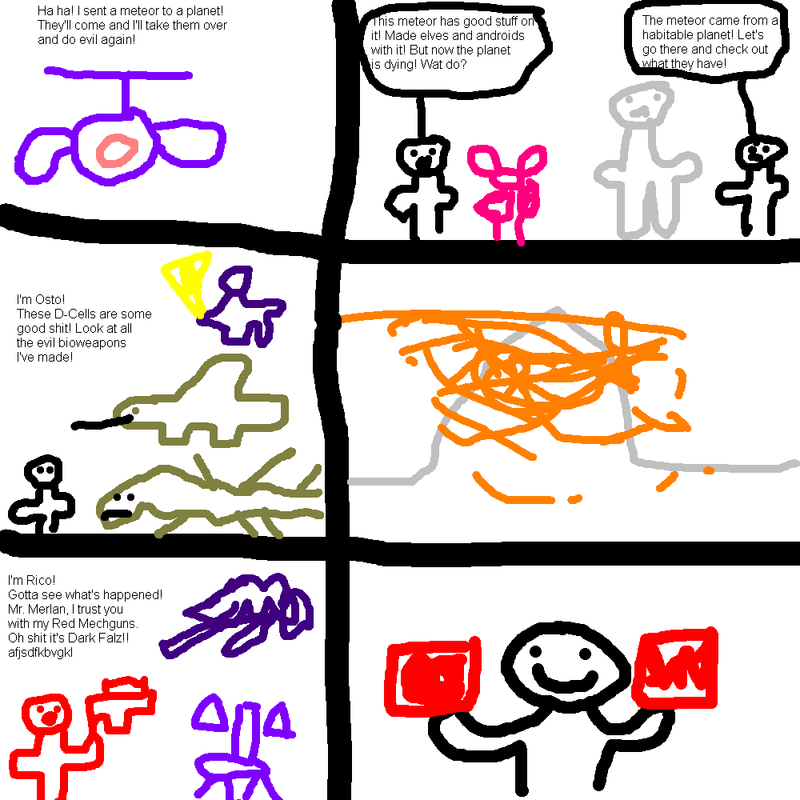 seems like this guys got a knack for writing. at least you keep Ephinea interesting with your stories rather than me seeing trade spams and quick question quick answer threads all bloody day

gotta dig through the forums to find cool stuff. bleeding boring looking at the same posts. keep up the good work Ghosts

Ah am a supah stah warriah

You forgot fun stuff like Works and ep. 4. Oh and how Ep. 3 ended the hunts for pgf and rr forever by falz and olga having a love child or some crazy thing like that. Nothing like a good old teacher/student romance.

Oh and Cards aren't photon weapons, kind of cool side note on them.

This was actually easier to understand than piecing together all the backstory from google sources.
Thank you, OP.

Wow. So awesome and satirical.

Ghosts, your epic storytelling talent shall be valued for generations to come.