Adding images to the lobby

You will also need some experience with using most of the above utils. This guide assumes that you know how to make image files for PSO.

Enabling Lobby Images in Lobby 1.
In its later builds Sega changed the PSOBB client so that lobby images don't load in lobby 1.
I'm not sure what their reasons were for this. I've had images loading in lobby 1 on EdenServ for a few years now and haven't had any reports of crashing caused by it.

To enable lobby images in Lobby 1 there needs to be a change made to the client. Load the uncompressed client into a hex editor and goto the raw offset 0x002707a7 (Virtual address: 0x006713A7). At this offset you should find the following bytes: 85 C0 0F 8E 23 01 00. These bytes appear as follows in assembly:

In the above code the lobby number is held in the EAX register. The lobby numbers are 0 indexed so the first lobby will be a value of 0. I wont get too much into assembly but essentially it tests if EAX is 0. It then jumps if the result is less or equal to 0.

You will also notice that the code after the above code compares EAX to 9. This code prevents images from loading in lobbies above lobby 10.

Increase the limit of images in the lobby
The client limits the amount of images that can be loaded into the lobby to 2. Each of these images however can be split into 4 pieces so you can technically display 8 different images. If you feel you need more a client change is needed.

The image numbers are 0 indexed so 1 would be 2 images. Change these figures to the required value.

I've tested increasing the supported images to 32. which gave me a relatively smooth animation of 15 seconds.

By default there is a limit of 2 images in the lobby_billboard.xvm file. However each image in this file can be split upto 4 pieces so technically giving you 8 images. Refer the PRC Splice Numbers PDF linked in this guide for more details.

For this example I've chosen a random gif:

This animation has 9 frames but I was able to remove 4 of them and still produce a smooth looping animation with 5 frames.

Now we're ready to position the images in the lobby.

To decrypt a PRC file use PRCTool with the following syntax at command prompt:

This will create a text file that you can view and edit in notepad. The contents of the stock PRC that comes with the default tethealla client is as follows:

As you can see the Sega dev's have made things easy for us. Declaring what each variable does.

Each image that you want to appear in the lobby require 3 commands, start, anime and end.
Start declares the positioning, sizing and rotation of the image.
Anime declares the length in which the image should be displayed and the splice number.
End declares the end of the settings for that image.

Also note that you can comment out a line with # and that all variables are separated with a tab (0x09) the client parses this file for tabs so you need to ensure that this is done.

As the Start variables are self explanatory I wont bother going over these.

The 2 values for anime: time and type.

Time is specified in frames. As PSOBB runs at 30 FPS setting this value to 30 will display the image for 1 second. If there is only 1 anime frame setting this value wont make any effect on its appearence it will appear constantly. If you wish to hide the image you'll need to add a transparent image to the lobby_billboard.xvm file and add that to the animation.

Type actually contains 2 values. The number of the image and the splice number. Lets use the following as an example:

The above specifies a time of 0 (as there are no other images in the animation the image will appear constant) and a type of 1. Now this value is actually read as 01 by the client. The leading 0 isn't required. 01 is specifying the first image (0) and splice number 1. If you refer to the "PRC Splice Numbers.pdf" you'll see that this is the top half of the image.

Again this image isn't animated (boring). but its type is 12. This specifies the 2nd image (1) and splice number 2. Again if you refer to the "PRC Splice Numbers.pdf" you'll see that this is the bottom half of the image.

If you have edited the client to increase the supported images to 3 images 12 could become 22 for the 3rd image. If you've increased the limit to 32 you can use 312.

Okay so now I hope you have an under standing of how the lobby_billboard.prc placement script works. So let's make our own to go with that animated gif I downloaded.

The above will place the image behind the counter in the lobby and stretch each image twice as wide as it is in height (15.0 x 30.0). As you can see there is a difference to this file. It contains 5 animation frames each frame lasting 5 frames. The frames that I'm using are: 05, 06, 07, 08 and 15. Which are top left, top right, bottom left and bottom right of the first image and then finally the top left of the second image before the animation loops.

Now to create your PRC file use the PRCTool with the following at command prompt:

Now to go test it. Place both the XVM file and PRC file in your data folder of your client. ensure that both file names are called "lobby_billboard".

Now just enter the lobby and you should find:

nice one and you can use map tools to move the image where you want i guess.

Awesome, thanks for this dude. I was always curious how to go about doing this.
B

First of all thank you for this! Second i managed to edit everything you said (your image works fine) but i can't seem to be able to use your PRCTool... I just have no idea how it works xD It just closes if i enter the prctool /d lobby_billboard.prc lobby_billboard.txt at the console, does it save somewhere or im doing something wrong? Sorry for the basic question ;/

Staff member
It'll decompress the PRC file in the location specified. In the command you've provided it'll unpack the PRC into the same folder as the PRCTool.

If you're not already doing so. Run PRCtool from command prompt. So you can catch any error messages that maybe occurring. If you place the PRCTool in your system32 directory or add its location to your PATH's you'll be able to use PRCTool from any folder in a command prompt window.
Q


Can you help me?

Here is a pic... just do CTRL + G, input the address and select hex, it will put the cursor on the right byte 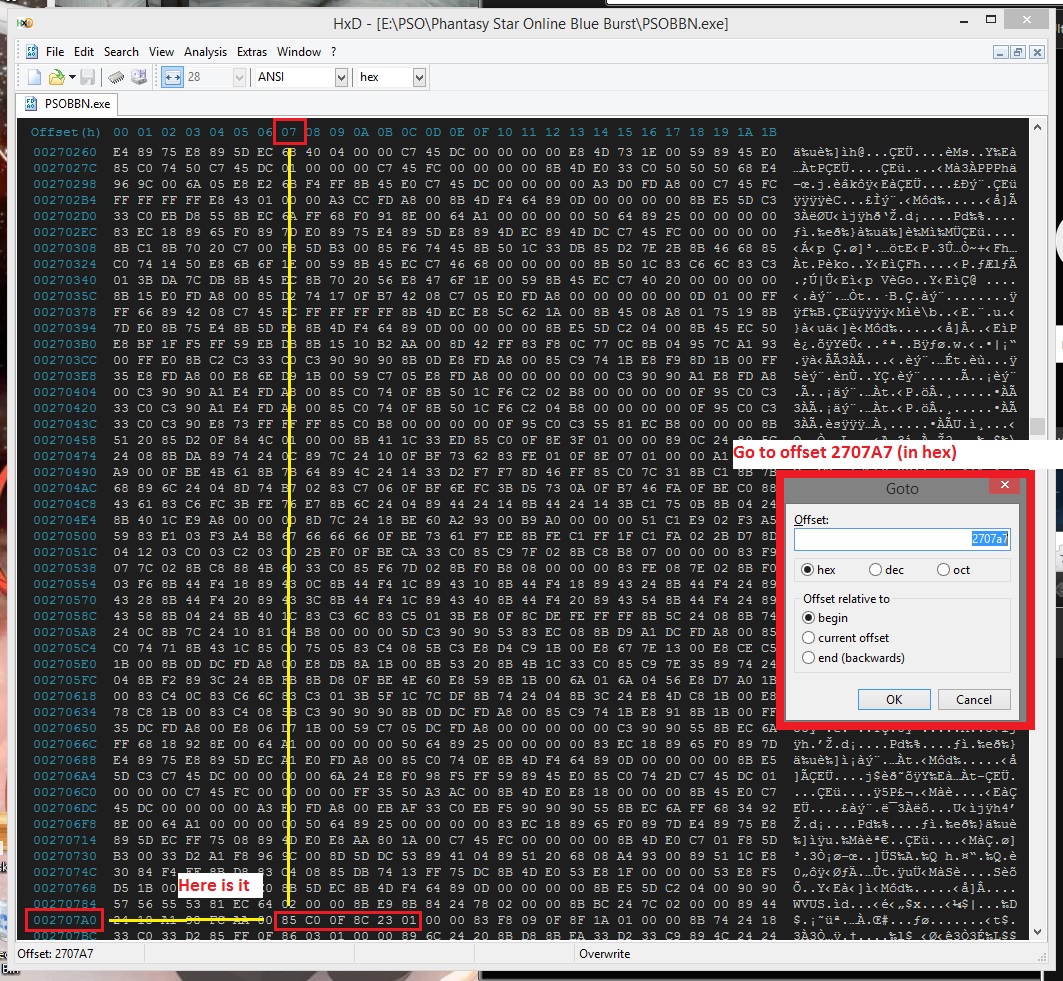 Staff member
I forgot to mention that this guide is for the 12.5.13 client. It's possible with 12.5.10 but the changes to the client will need to be done at different offsets.
Q

Is it possible to adding 3D image or Object to lobby using this step?