I would like to request assistance on 3 matters, since they have quite a bit of content in them i will try and place them in spoilers.
Anyone (well, not exactly anyone) can help out, i lack the knowledge for these 3 things and i lack the hardware, so if you have a decent pc and hex editing knowledge (i summon tofuman) then keep reading.

PSO v2 pc (a port of the dreamcast v2 version) has been made available in widescreen for quite awhile, i didn't do it, someone else did, still i grabbed what that person did and i made the concept available in several resolutions so that ppl could try and see how the concept worked and what things needed to be improved.

Particles and the hud

Later on i received a custom res exe with certain things fixed, like part of the hud and the particles, i would like to make the rest of the hud a tad nicer to look at and make the game available in other resolutions.
width, height and fov X, Y values i know how to change, but the hud and the particles i have no idea.
I tried comparing files but there have been changes that i can't understand, i can't pinpoint exactly how to change these.

I can provide not only the initial exe (while pointing where the res and fov are located) but i can also provide the custom 1680x1050 exe with the particles centered and maybe someone can help me identify where to change the stuff that is missing, possibly even making a 2560x1600 exe with the particles centered, making more screenshots a possibility, right now my screenshots at such res have no particles, because they are all very tiny and smashed into the top left corner.
Fov

Out of curiosity i decided to increase the fov to allow more content to be displayed on screen, i then tought of doing 360º gameplay and even upload it on youtube, imagine gameplay where you could rotate the camera, pretty cool right?
Only one problem, i can't seem to reach 360º view, i already used a fov around 150x higher of what is considered normal (even for widescreen) and the image gets weird, i get this tunnel vision where things on the sides are very close and things in the middle are very far away, so far that gameplay is pretty much impossible, i ended up playing on an aspect ratio that was somehow close to 30:1, with a window so small and so wide that makes everything unpractical.
Why can't i do 360º?
I do get more viewing angle, but not 360.
http://i.imgur.com/O7fsxp8.jpg
The screenshots above 2560x1600

While PSO does run in window mode in pretty much any res (the only game that i have that behaves like that) anything higher than the res supported by my graphics card can't be displayed to the public, i can't take a screenshot as the game instantly crashes when i do, fraps also seems to be the only software capable of taking the screenshot at the res i desire.
I understand that 4k gamming is avaialable, so i assume that requires specific graphic cards for the effect right?
Does anyone here have a capable machine with the hardware necessary to take a screenshot by using a 4k exe of pso v2?
I can guide you in the steps of doing anything i do, from removing the hud, changing the camera angle, using fraps and it should take me 5 minutes to make a custom res pso exe (without the particles centered)
I don't expect anyone to start taking screenshots left and right like i do, but having atleast having 1 good one would be an interesting thing
Last edited: Apr 7, 2016

Hmm, did you try scht? Not trying to turn you away, but the v2 community is there as you probably know. If they gave you no answers then I can see why you tried here lol.

Biased replies, no replies and replies that are essentially "i have tried it, it's pointless for anyone to try it because everyone except me is a monkey" are things i'm not in the mood to see.

I ask because here the intentions are a bit clearer, this isn't exactly PSO v2 related knowledge, i figured that if this server is popular and has competent ppl, then it should have really good chances of improving the v2 exe, even if it's just for a particular type of gameplay.
Schtserv isn't something i will consider at any point

I wanted to try my luck here because quite honestly i haven't tried anywhere else, this is the 1st time i'm asking, i wanted to see if there is anyone willing to help on any of those 3 subjects.
I have hit 3 walls, maybe someone else can pick up where others left of.

Hi KIREEK, re. the FOV, it's not possible to get a FOV of 360 without modifying the rendering "camera" to splice together views from different angles outward from the player character. In most games your camera faces forwards.

To use an analogy, increasing FOV is like zooming out on a camera lens but that can't allow the photographer to see behind them.

To do that, you need to literally put eyes in the back of your head -- i.e. code in a separate camera view for the game which is spliced in with the normal. Here's two different examples of this, both using the Quake engine:

That being said, if you're a whiz with coding (I am not, unfortunately) something you -might- be able to do is to hook into the game's memory and make hotkeys to rotate the camera around the player, much like how PSO2 allows you to rotate the camera with the right analog stick. If that were pulled off, you could take multiple screenshots from different sides of the player and then photoshop them together afterward.

However, this is speculation on my part and I have no idea what memory addresses would control camera angle, or where one might start looking for them.

Hi Kireek! I think my computer can maybe do screenshots for you. When my brother gave me his video card he said I could play anything I wanted on it. He hooked it up to my parents 4k TV too and played street fighter with his friend and said it looked awesome! I don't know how to do any programming stuff and I don't have fraps either though...

Well PSO BB does have a few tools like that, PSO V2 has them aswell (coded in the game actually) but it uses keys you already use for movement and actions, so when you control the camera you also control your caracther, so it's a pain.

For PSO BB you can do some cool stuff, at some point i did make some images like that and i know some ppl can make images where they rotate all around them and not just to the sides, it's like you are floating in the air.
https://kireekpso.files.wordpress.c...-76-psobb-2014-08-15-17-37-35-26-cc3b3pia.jpg

Combining images to create that effect is a bit hard (sometimes requires manual input)
The issue is usually getting a final image that has a decent res, to the point you can make triple screen wallpapers and stuff.

As for recording, i believe the quake mods use several cameras and not just 1, they also use specific methods to blend the several cameras into 1.
Obviously on PSO that might be to much, i assumed that raising the fov alone alot would create the 360 view, but i was wrong, games are usually not designed for that effect, you can only go so far.
I guess you indeed need several cameras.

But you can see the idea, have you ever seen 360º podcast videos on youtube? Imagine being able to interact with a game video instead, rotating the camera in an interactive way, that would be something.

@Shichimiya
Fraps is easy to get (and i mean the one without any text on it) and i can provide a custom PSO v2 exe after you have your game running.
The idea is to demonstrate if such a screenshot is possible, on my system the game crashes beyond a certain resolution, maybe on yours the screenshot can be taken.
I'm not looking for something over the top, without a caracther, images with AA and trilinear filtering at 16x and bloom, it would be nice to know if it's possible before going on adventures.

Sorry for the double post but it might be better this way
2560x1600 was my best screenshot and i never knew if higher was even possible, the game surealy ran at higher resolution, i just never could show it.
I was likely hitting a limitation on the graphics card itself (the max res) or maybe it was the OS, or the drivers, or directx, or fraps or a mix of all of them.

shichimiya used a 4k version and indeed PSO v2 can run at 4k, not only that but he managed to pull some screenshots.
Credits to shichimiya, she is the 1st person to actually run PSO v2 at such high resolutions and taking screenshots. 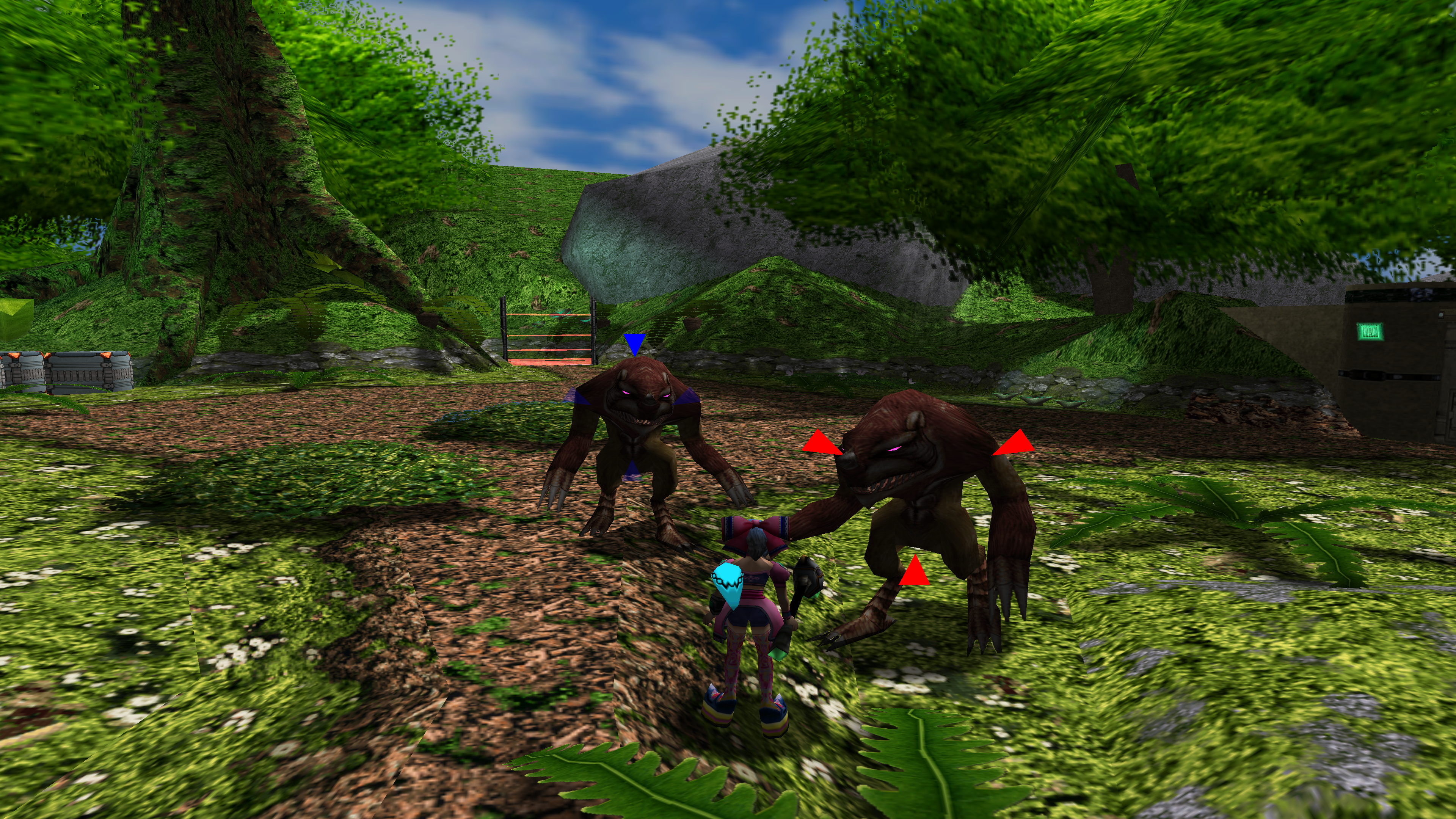 I am glad I could help! I'm sorry my screenshots aren't as pretty as yours though
Also I am not a he But my brother helped too, he showed me how to hook the computer up to the Tv and how to use the Nvidia thing to make it look nicer.

I use my own graphical settings on the ATI that make it look nicer, one of them being the Anti Aliasing, i sometimes also use a slight bloom that makes the game look more vibrant, skins also help.
But the basic is pretty much what you have now and it looks great nontheless.

You also made use of certain tools like the removal of the hud or the area warp, that's also good.

It's true that some of the things i do are part of trial and error, for example you now know how i remove the char and the trainers weren't meant to do that.
E