Staff member
I've only ever watched my sister's ex play it in the past... I've never really been a racing game fan, with the exception of Mario Kart and an old school MS-DOS game called SPEED RACER. (Based off the animation series.)

Also, forgot to post this here. 100 Miles of VIR, I think I stopped gaming for about a week since my hands were killing me. Constant clutch pressing, gear switching, braking, easing on throttle. I fucking love it.

looooool that drift into the coke sign. Also when you took first was the AI (assuming it was) forced offroad by its rubberbanding? The timing was too coincidental.

I think he just veered off track, that chicane is extremely slippery because of the very low speeds (low speeds don't make use of the downforce, so the car isn't being pushed down onto the track), one of the reasons I lose it there looool. I think later in the race I also go off track on the third chicane near the end of the track. I disable STM, TCS, and ABS, so any little mistake becomes a massive mistake on those LMP cars lool

#1 worldwide this time around on Forza Motorsport 6: Apex

lol dang that was a lotta good passes. Also Lol at those drifts xd pretty nice.

great vid. i used to watch supercar racing quite a bit! if i had TV i probs would now.. xD

Nyte said:
great vid. i used to watch supercar racing quite a bit! if i had TV i probs would now.. xD
Click to expand...

I haven't watched supercar racing in a long time. I used to love watching the BTCC back in the 90s and early 00s.


Lol @ 3rd person view and assists, I don't know how people can play with assists on, it's so restricting.

Bump. PC and Xbox One version releases September 23rd for those that pre-ordered the ultimate edition.

Also, this guy ramming me was taking the demo a bit too seriously. Had to trick him at 17 seconds loool.

Bonesy said:
i have forza horizon since games with gold and i've barely played it

played it enough to buy an eight-six then got distracted by going back to playing Super Robot Wars Z3-1
Click to expand...

I downloaded Forza Horizon when it was the free games with gold this month and I've also barely played it. I missed out on Forza Horizon when it released back in 2012 since I think I was busy playing Forza Motorsport 4 at the time. Feels too "old" and clunky for me. FH2 on Xbox One was a massive improvement since the 360 didn't allow for a real open world in the 1st Forza Horizon. Can't wait for FH3 this Friday though.

I love this game. Tried out the Game DVR on the W10 Xbox App and the quality was pretty good.

Also, managing a club when it's full (1000 players) can be a hassle at times loool 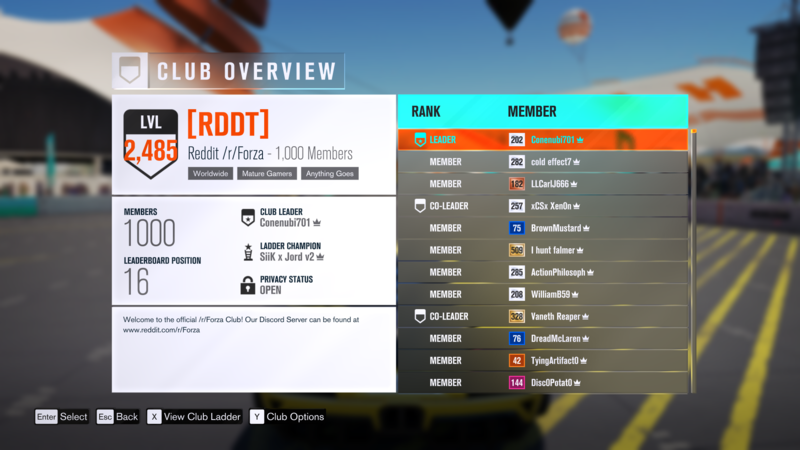